The Riverland is one of Australia’s largest wine growing areas, and quickly establishing itself as a major force in almond production, from when the Chaffey brothers first started pumping river water for irrigation, the Riverland has grown to be one of Australia’s most important food production areas – grapes, nuts, citrus, olives, fruit and vegetables all thrive in the area that is known to have more sunshine hours a year than the Sunshine Coast.

Recently there has been a lot more cellar doors opening up, plus the unique Banrock Station, Wilkadene Brewery , 23rd Street Distillery and The Riverland Wine Centre.

The Riverland areas covers from the Victorian Border, to the major towns of Renmark, Berri, Barmera, Loxton, Waikerie, Cadel, Morgan and Blanchetown.

The areas along the river varies from Ochre cliffs, to a multitude of creeks and back water, Lake Bonney, river red gums and vineyards.

For the visitor, there is a range of hotels, cafes, shopping centres. For those interested in history – Morgan was once the busiest inland port in Australia, now home of the Pw Canally.

From Blanchetown right down to Mannum you will see many of the stunning sheer cliff faces that thus area is well known for – Big Bend Cliffs are reported to be the most photographed section of river on the Murray River System. From Blanchetown to just out of Mannum you are also in the recently nominated “Murray River Dark Sky Reserve “ – a mecca for astronomers, photographers and bird watchers alike. For more information visit Big Bend By Night and  Murray River Dark Sky Reserve.

Mannum – Birthplace of the Murray River Paddle steamer, and arguably the first steam car in the world. Today Mannum thrives on its history with paddle boat cruises, museum and interpretive centre. Mannum has a two supermarkets, butcher, bakery’s, cafes, hotels, petrol stations, hospital and medical centre. Call into Cafe Mannum at the Mannum Motel for breakfast, lunch or dinner, and see some local photography on display

Heading down stream we pass the areas of Caloote, Wall Flat, Mypolonga, Sunnyside, Greenbanks and onto Murray Bridge.

The Rural City of Murray Bridge is the largest of the towns with all the facilities you require, plus very close to the Monarto Safari Park ,  The Bend Motorsport Park, Langhorne Creek Wine Region and Coorong National Park. 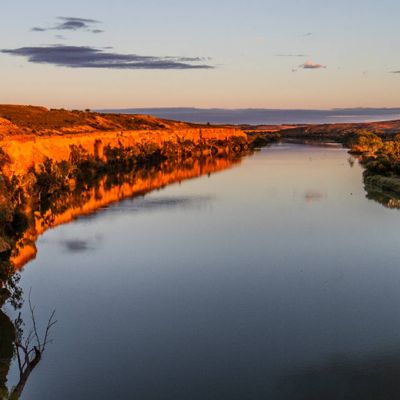